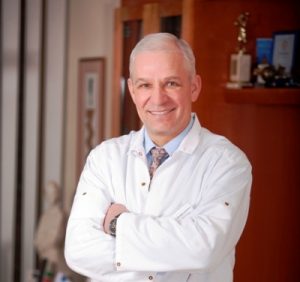 GP clinic is located in the Old Town of Kaunas, in a restored mid-nineteenth century building complex. This is an ensemble of atypical citizen homestead, which architectural historians call “Dvarelio compex“. This is an especially important relic of the city which had the Magdeburg rights. The ensemble of these buildings – a synagogue, a dwelling house, a small school and outbuildings – previously belonged to the Jewish community. The ensemble of masonry buildings of the irregular trapezoidal plot, which was touched by architects and restorers, was formed about the middle of the nineteenth century. Archaeological findings indicate that people already lived in this plot in the XIV – XV centuries. From the mid-nineteenth century, the Jews began to manage the plot. During the Soviet years, this architectural ensemble was abandoned and completely decayed, some buildings were converted into warehouses.

Reconstruction of the buildings ensemble was intended to restore the unique structure of that period and leave something valuable for Kaunas. The building is to be protected, therefore, according to the requirements of heritage, the efforts were made to preserve as much authenticity as possible. Dvarelio complex of buildings was renovated and reconstructed in accordance with the project of the architects Rymantė Gudienė, Liuda Perevičienė and Vilija Skėrienė.

In one of the two masonry buildings of the yard there is located the Dr. G. Papečkys Surgery Clinic – GP CLINIC with the day surgery stationary, ward for patients, as well as modern fragment of the complex adapted for operating rooms.
The original building basements of that time also remained. It perfectly succeeded to reconcile the authenticity with the modern architectural elements. There is no need for the visitors to go from one building to another through the open yard because the buildings are combined by the glass roof. Today, this urban ensemble is the centerpiece of the whole Old Town.