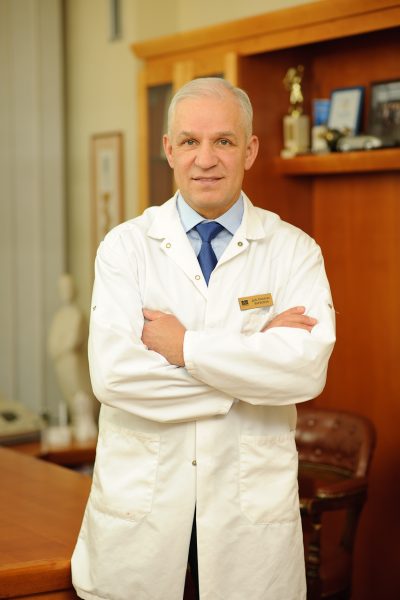 Plastic and reconstructive surgeon Gintaras Papečkys started his private medical practice in 1988. The doctor was one of the first surgeons who began to develop the plastic-aesthetic surgery and aesthetic medicine in Lithuania since 1991.

Surgeon G. Papečkys has performed over 6,000 aesthetic surgeries and is a Lithuanian pioneer of such surgeries and aesthetic procedures as: fat grafting procedure (1996), male genital correction (1997), botulinum toxin injections (1999). He was one of the first to use a “heavy” hyaluronic acid filler – Restylane Sub Q (2002) for face shape corrections. The surgeon was the first one who began using a new-generation fillers for facial correction – Radiesse (2009), for breast, buttock correction – Macrolane (2010). While developing the minimal invasive aesthetic facial surgery, the surgeon has introduced a suspension thread – “Silhouetle Lift” (2010) for lifting the weakened facial tissues. He started to apply platelet rich plasma (PRP) injections (2011) and was the first one in Lithuania who has performed the brand-new aesthetic medical procedure – special-cell transplantation in facial skin (2011).

In 1981, G. Papečkys graduated from the Medical Care Department at Kaunas University of Medicine with highest distinction. He was working in the Surgery Clinics of one of the largest institutions of medical care in Lithuania – Kaunas Academical Clinics – for thirteen years. During his medical practice at Kaunas Academical Clinics, he was also giving consultations and working as a surgeon in “Kaunas Medical Centre”, the first private clinics in Kaunas.

The surgeon is a full member of Lithuanian Society of Plastic and Reconstructive Surgery, a member of International Plastic and Reconstructive Surgery Association. Plastic and reconstructive surgeon Gintaras Papečkys has upgraded his qualification in Austria, Belgium, Greece, France, Russia, the United States of America, and Italy. Currently, he is working as a surgeon in a private clinic in Tallinn “ChristinasClinic.” Dr. G.Papečkys has operated many famous Lithuanian music and show business representatives, prominent businessmen.

During his free time, surgeon Gintaras Papečkys prefers an active way of life. G.Papečkys is a multifold prize winner and awardee of Lithuanian tennis tournaments, a winner of ​​Omnitel 1000 km race, and a member of World Medical Tennis Association. G.Papečkys is also an active public figure, one of the founders and the first president of “PORKER” Porsche Club of Lithuania, a member of the Rotary Club of Kaunas “Romuva”. The doctor’s hobbies are tennis, motorsports, downhill skiing.